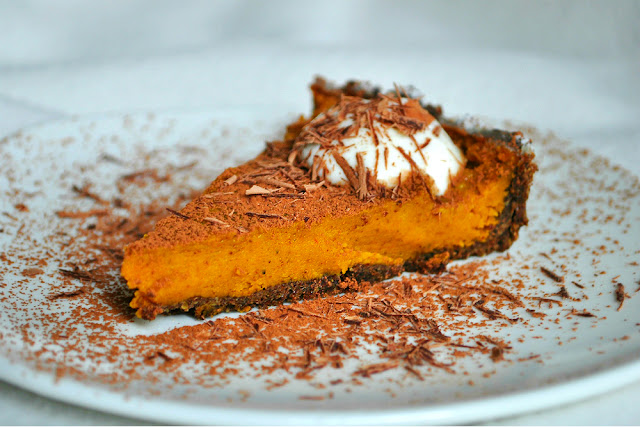 Today's recipe comes just in time for Thanksgiving! I'll be making our Thanksgiving dinner again this year. And just like last year unfortunately, it will also be away from all my family and friends. Besides them, one of the things I miss most about home is just being able to step out onto my porch and breathe in the autumn air, the smell of pine trees and smokey backyard bonfires wrapping around me like an old, familiar blanket. Every year without fail, as soon as September rolls around I have this strong urge to PUMPKIN ALL THE THINGS. Like Pavlov's dogs, there's something about the crisp fall air that immediately makes me want to ravenously consume pumpkin yummies and drink hot pumpkin spiced lattes. Even though the smell of fall is absent here, my body is still wired to want pumpkin things around this time. And what better way to get my pumpkin fix than in the form of the traditional pumpkin pie?

I've seen many gluten-free recipes that use nuts for the crust, and while I definitely agree that nut crusts are delicious, they're also very calorie dense. Flaxseeds are a great alternative in my opinion, especially if you are having digestive issues - for constipation, a tablespoon or two of flaxseeds will help that right along! Even though most brands tout the abundance of omega-3s in each serving, it seems the body is not very efficient at converting the non-useable ALA form into the useable forms of EHA and DPA (the level of efficiency seems to be slightly better in women, probably due to higher levels of estrogen). There are other concerns about flaxseed that I've read around the paleosphere as well. Still, I like to use flaxseed in special occasional treats such as this.  If you do use flaxseed, always buy them whole and raw, never ground, and store them in the refrigerator. They go rancid very quickly, so only grind them right before using.


Many pumpkin pie recipes are also filled with sugar and dairy. The recipe on the back of Libby's pumpkin pie puree uses evaporated Carnation milk in addition to a ridiculous amount of sugar. I'd rather not slip into a diabetic coma, so I decided to come up with my own recipe for pumpkin pie using less sugar but still just as delicious. You can always sprinkle more honey on top if it turns out not sweet enough. In addition, I always taste my mixture and make sure it's to my liking before I pour it into the pan. I ain't scared of no raw eggs.


Pumpkin pie is really just a firm custard in a crust, and the basic recipe for a custard is eggs and milk with some sweetener to taste. I cut up a pumpkin and roasted the pieces, and I was able to save enough of them from going into my mouth to make some pumpkin filling, which ended up being about 200g worth of pumpkin. I made about 5 pies before deciding on the final recipe. Each time I didn't bother to measure anything except for the pumpkin, and every time the pie turned out great. You really can't mess this up! 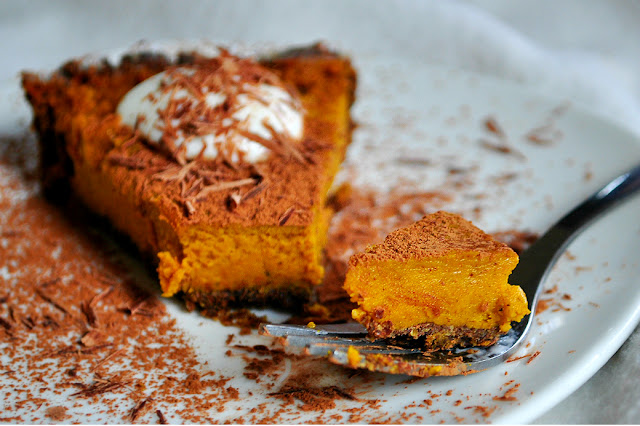 For the crust:
For the pumpkin pie filling:
Pumpkin spice mix:

This is also firm enough to make without the crust and eat it as a custard, which I have been doing for the past few weeks! If making it without the crust, the nutritional breakdown is as follows:

Some additional notes:
- For a protein packed pie, replace the sugar with some vanilla whey protein. You might have to add a bit more milk if you do.
- If you add too much potato starch, the custard might end up almost bread-like. I've found that when I use whole pumpkin pieces, the pumpkin has enough starch to hold it together and I never need potato starch.
- You can use a pan / quiche dish larger than 9". If you do and you are afraid that the mixture isn't enough for your pie, you can add up to a cup more of pumpkin puree / pumpkin pieces and a bit more milk without affecting the overall recipe.
- I used a smaller oven, so baking times may vary! Keep an eye on your pie.